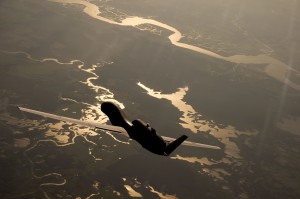 The military has always maintained an interest in the application of nuclear energy in its operations. In a bid to reduce logistical strain caused by power-hungry bases and vehicles operating over significant distances, some military forces have experimented with nuclear technology to seek potential solutions. However, it is unlikely that such concepts will become a mainstream reality.

In April 2012 American scientists unveiled a radical plan for advanced unmanned aerial vehicles (UAV) powered by ‘next generation concepts’. The proposal, titled ‘Unmanned Air Vehicle Ultra Persistence Research’ was jointly developed by Sandia National Laboratories – the US government’s principal nuclear research and development agency – and military contractor Northrop Grumman. The research team noted that the application of such persistent technologies to UAVs would dramatically extend flight times, as well as enable more powerful sensor and weapon systems to be fitted.

The proposal all but established that the team had been experimenting with nuclear propulsion concepts, especially when considering Sandia’s background and the research team’s concern over political sensitivities of nuclear power.

Military exploitation of nuclear power has not always been limited to weapons of mass destruction and large naval platforms. As early as the 1940s, American scientists experimented with a salt-based nuclear reactor concept for civilian aircraft propulsion. However, early designs lacked durability and it was not till 1954 that a stable reactor was built at the Oak Ridge National Laboratory.

During the Cold War, both the United States and the Soviet Union experimented with nuclear technology for its military aircraft, with the same intention to develop intercontinental bombers capable of reaching virtually any target on the planet. American defence contractors at the behest of the United States Air Force (USAF) investigated the feasibility of nuclear powered military aircraft, which was never realised as a result of cost and technical limitations, as well as crew safety concerns. On the other side of the Bering Strait, the Soviet Union also pursued its own nuclear-powered aircraft development. Despite promising results from limited flight-testing, Soviet military interest in the nuclear-powered bomber soon faded in favour of more cost-effective ballistic missile systems.

There had also been an interest in the application of nuclear power for land-based forces during the same period. From early 1950 to late 1970 the US military had investigated the possibility of deploying smaller-scale and portable nuclear reactors in a bid to reduce logistical challenges imposed by energy-dependent vehicles and military bases. For example, a 1963 study submitted to the US Department of Defense (DOD) proposed the use of a small nuclear reactor as the power source for an energy depot.

The proposal, called the military compact reactor (MCR), was an attempt to solve the logistics problem of supplying fuel to military vehicles on the battlefield. While military vehicles could not derive power directly from the nuclear reactor, the MCR could provide power to produce synthetic fuel to replace conventional petroleum fuel. In addition to the MCR, US Army engineers had also successfully operated a series of compact nuclear reactors in remote military bases, and even considered the use of nuclear power overseas to provide uninterrupted power in the event that US bases were cut off from regular supply lines. However, further development of the MCR ceased due to the cost and technical limitations.

Other concepts had been more successful. From 1968 to 1975, the US Army operated a floating nuclear reactor which supplied electrical power in the Panama Canal Zone. Even though it proved its worth, the floating reactor eventually ceased operation due to high costs and the cancellation of the Army’s nuclear research programme.

Civilian And Military Nuclear Incidents
Despite improvements in nuclear safety, public sentiment on nuclear power is generally unfavourable, particularly after a series of high-profile nuclear incidents over the years. Disasters like Chernobyl, Three Mile Island, and the recent Fukushima episodes have sorely demonstrated the perils of operating nuclear reactors, emanating be it from human error or natural calamities.

Military forces have also been stung by peacetime nuclear incidents. In March 2008, the American nuclear submarine USS Houston leaked minute amounts of radiation into Sasebo naval base while on a port call, triggering condemnation from Japanese citizens in the district. In the same year, the British nuclear submarine HMS Trafalgar leaked hundreds of litres of radioactive wastewater into a nearby river while docked at Devonport naval base, raising concerns from nuclear safety experts.

Mainstream Nuclear Power In The Military?
Yet military scientists have not ceased to be tempted by the potential of nuclear power. In response to increasing oil prices and global supply uncertainties, and well-documented cases of logistical strain on forces operating in the Middle East in recent conflicts, the US Defense Advanced Research Projects Agency (DARPA) issued a proposal for innovative solutions in deployable compact nuclear reactors in 2010. In the proposal, DARPA outlined the need to reduce the logistical burden of supplying forward operating bases and forces without access to reliable fuel supply lines. The proposal also suggested that materials science have advanced to the stage where it might have a positive impact on deployable nuclear reactor research.

While recent developments suggest that nuclear power technology can potentially be employed in unmanned aircraft and on the ground, it is unlikely to have mainstream military utility. The Cold War period was an era when general attitudes towards nuclear energy were quite favourable, and military experimentation was only limited by funding and scientific expertise. In contrast, nuclear power today has become a hotly debated issue despite its importance in powering the economies of advanced nations today.

For the military, the problem with nuclear power is not just about cost and safety, but also of the nature of its operating environment. Deploying volatile nuclear reactors into harm’s way on the battlefield, where their destruction and sabotage are likely, should give military planners cause to pause.