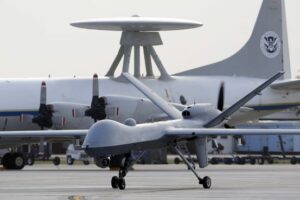 The Obama administration is weighing policy changes that would lift a tattered veil of secrecy from its controversial campaign of drone strikes, a recognition that the expanding program has become a regular part of U.S. global counterterrorism operations.

U.S. drone strikes are hardly a secret. Officials have spoken openly about them, even discussing the operations in formal speeches. But they are still classified, and unauthorized disclosures about details of individual missions could constitute a felony.

The policy changes under consideration could include specifying which extremist groups associated with al Qaeda can be targeted by the Pentagon under the 2001 congressional authorization for the use of military force against perpetrators of the Sept. 11 attacks, according to U.S. officials.

The debate has been given urgency by lawsuits seeking information on drone strikes; the government must formally respond with motions stating its position and why it will deny the requests, or fill them.

But many officials also believe that it is time to re-evaluate U.S. policies on secrecy about the targeted-killing program, saying that greater openness could defuse criticism of the practice.

Unmanned aerial strikes on terrorist suspects began after the Sept. 11 attacks, at first as a rare occurrence. Under the Obama administration, drone strikes by the Central Intelligence Agency and the military have become increasingly common as a primary tool in U.S. national-security strategy.

The Pentagon has a policy of disclosing traditional military operations once they are complete. But rules for counterterrorism strikes haven’t kept up with their expanded use. Pentagon officials still routinely decline to discuss details of operations in Yemen or Somalia at news conferences as a matter of policy, while more freely discussing counterterrorism operations in Afghanistan.

The changes considered most likely to win adoption would bring about greater openness regarding the military drone program, while keeping most or all details of CIA strikes classified, U.S. officials said. CIA officials are opposed to publicly acknowledging the details of drone programs under its control, for fear of setting precedents that could affect other covert programs.

Read the full article at The Wall Street Journal