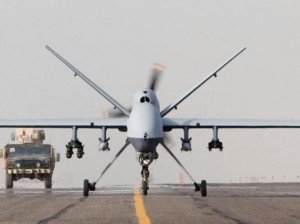 The Obama administration plans to arm Italy’s fleet of Reaper drone aircraft, a move that could open the door for sales of advanced hunter-killer drone technology to other allies, according to lawmakers and others familiar with the matter.

Lawmakers who question the planned deal say the decision to “weaponize” Italy’s unarmed surveillance drones could make it harder for the U.S. to deny similar capabilities to other North Atlantic Treaty Organization allies, and set back efforts to urge sales limitations on other nations that make sophisticated drones such as Israel.

Advocates say such sales would enable trusted allies to conduct military missions on their own as well as help open markets for U.S. drone manufacturers.

The administration sent a confidential “pre-notification” to congressional panels in April detailing its plan to sell kits to Italy to arm up to six Reaper drones, which are larger, more-powerful versions of Predators.

The administration gave Congress a longer-than-usual 40 days to review the proposed sale. The period ended May 27 without a move to block the sale, according to congressional officials, clearing the way for the deal to move forward and for a formal notification of Congress as soon as this week.

Congress still could block the sale if it passes a joint resolution of disapproval in both the House and the Senate within 15 calendar days, though several members of Congress from both parties say such a move is unlikely.

A Pentagon spokeswoman said the U.S. won’t comment on proposed foreign military sales until Congress is formally notified of them. “Italy is a strong partner and NATO ally that significantly contributes to U.S. and NATO-led coalition operations,” said the spokeswoman, Commander Wendy Snyder.

She added: “The transfer of U.S. defense articles and services to Italy, among other allies, enables Italy to burden-share and contribute capabilities to operations that protect not only Italian troops but also those of the United States and other coalition partners.”

Critics of the proposed sale include the head of the Senate Intelligence Committee, Dianne Feinstein, a California Democrat. “America’s cutting-edge high technology should not be shared. That’s just my view,” Mrs. Feinstein said. “I am concerned by the proliferation of these weapons systems and don’t think we should be selling them.”

A chief concern of critics is that the administration has yet to spell out what strings, if any, would be attached to a sales of this type to Italy and other future buyers.

Read the full article at: WSJ