Turkey to Buy Armed UAVs from the U.S. 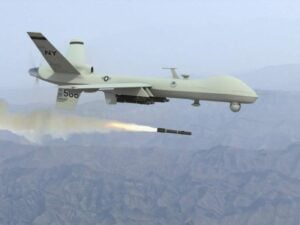 President Barack Obama’s administration is inclined to sell armed drones to Turkey but has to convince Congress first, Turkey’s president told reporters after a meeting with the U.S. leader.

Washington, which is providing technical and intelligence to Ankara in its fight against autonomy-seeking Kurdish rebels, deployed four Predator drones from Iraq to Turkey last year. NATO-ally Turkey is now trying to acquire armed drones – the kind the U.S. has used to target militants in places like Yemen and the border region between Afghanistan and Pakistan.

But analysts say some Congress members may oppose the sale of armed Predator drones to Turkey due to its tense relations with Israel, a close U.S. ally. A botched Turkish military airstrike in December aimed at the rebels of the Kurdistan Workers’ Party that killed 34 civilians is also likely to further complicate any sale.

“The administration’s position (toward the sale) is favorable,” Turkey’s state-run Anadolu Agency quoted President Abdullah Gul as telling Turkish reporters after a meeting with Obama on the sidelines of a NATO summit in Chicago late Monday. “They are trying to convince Congress.”

“President Obama, Secretary of State Clinton and their aides are trying their best,” he added.

The Turkish president said he told Obama during their discussions that the armed drones are not as lethal as F-16 fighter jets, which Turkey already has in its fleet, or the F-35 fighter jet whose development Turkey is involved in.

“This must be explained to Congress,” Gul said. “They must not act begrudgingly toward an important allied country. They have to trust it.”

Gul would not say how many armed drones Turkey has requested from the United States.

Last week, the Wall Street Journal said the attack, which struck a group of smugglers and resulted in one of the highest single-day death tolls in the long-standing conflict between Turkey and the rebels, was based on intelligence provided by a U.S. Predator drone.

U.S. officials reportedly told the newspaper that the Turkish military carried out the attack before more information on the men was obtained, raising questions about how Turkey uses intelligence provided by the Predators.

Turkish officials have dismissed the report, saying the first images of the group were captured by the Turkish military.

The Kurdistan Workers’ Party, which took up arms in 1984, is labeled a terrorist organization by Washington.