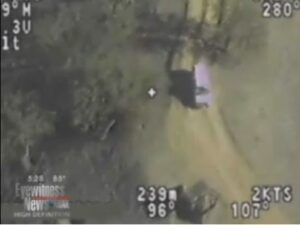 Eyewitness News has released and article questioning whether domestic use of UAVs protects American soil or is an invasion of privacy.

They’re used by our military servicemen and women overseas to keep on eye on terrorists and to keep them out of harms way when on the frontlines. Soldiers are able to send Unmanned Aerial Vehicles, or drones into the air to see exactly what they are facing first without putting themselves in danger.

The technology will soon be used domestically and it raises questions regarding privacy.

In February, Congress mandated the Federal Aviation Administration to open airspace to drones, something that has never been done before.

“These systems are carried by men in the backpack or in their vehicle so when they encounter a situation that is on the other side of that hill, they can quickly pull them out of their backpack. They can assemble it and in a matter of moments they can get live video of what is going on ahead of them,” Aerovironment VP of Communications Steve Gitlin said. His company responsible for 85% of the drones currently used by the U.S. Military

But in a few short years, these vehicles may be able to be seen from your backyard. In February, President Obama signed the FAA Modernization and Reform Act of 2012. It mandates that the Federal Aviation Administration administer a program that integrates drones into the national airspace system. That means the drones can be used for a variety of reasons including: crisis situations, surveillance on U.S. Borders, and use by farmers to monitor crops.

“We’ve gotten a lot of inquires from police, fire departments and even motion picture companies. We’ve even got inquiries for organizations who want to use these systems to monitor rare wildlife in Africa and keep an eye out for poachers,” Gitlin said.

But law enforcement agencies nationwide have other plans for the technology.

“Let’s say a toddler gets lost in a city park. In that type of a situation if you are in an urban area, you want to get eyes on target as soon as possible and find that child. If one of those first responders were to show up at the park with one of those cube systems in their car, they could quickly put this up in the air and get a broad view of that entire area and try to find that child as soon as possible,” Gitlin said.

The ones that will be used for domestic use could be smaller than the ones used overseas. But they still do the same job. The units take off like a helicopter and can hover in a fixed position or follow a target. The drones are so quiet that they could hover above a person without them even knowing it. That is one of the reasons why bringing drones to American soil is raising some eyebrows.