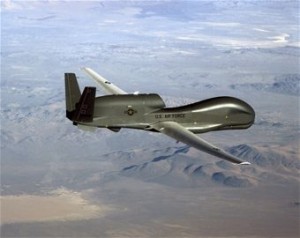 Northrop Grumman Corp said on Sunday it had signed a $1.7 billion contract with NATO for a new surveillance and intelligence system that will include five high-altitude unmanned Global Hawk planes and transportable ground stations.

Northrop Chairman and Chief Executive Wes Bush signed the contract in Chicago on Sunday during a NATO summit, joined by officials from European companies participating in the deal and 28 ministers of defense from NATO countries.

The NATO deal comes as Northrop is fighting to reverse plans by the U.S. Air Force to cancel a different version of the Global Hawk plane, the Block 30, and put 18 planes already purchased in storage. The U.S. Navy is sticking to its plans to buy a maritime version of the plane.

Bush told Reuters the NATO order was an “important step” for Northrop’s efforts to market the unmanned planes to foreign governments, and demonstrated the power of pooling resources as defense budgets become more constrained.

“This is a great example of how we are able to do things together that we might not be able to afford otherwise,” Bush said in a telephone interview.

Otfried Wohlleben, program manager of the NATO Alliance Ground Surveillance Management Agency (NAGSMA), said the agreement was a major acquisition priority for the alliance, and the contract would bring lead-edge capabilities to all NATO member nations.

“The real-time long-endurance intelligence, surveillance and reconnaissance that this will provide will be invaluable to NATO forces around the world and the success of their missions,” Wohlleben said in a statement.

The contract includes the purchase and initial operation and maintenance of five Block 40 Global Hawk planes equipped with an advanced ground surveillance radar, the Multi-Platform Radar Technology Insertion Program, which can track moving targets on the ground.

Initial plans called for NATO to buy three Global Hawk planes, but ongoing discussions led to a decision that having five planes would provide the optimal capability, Bush said.

Bush declined to give a breakdown for the size of the European participation, but said it was sizeable.

Thirteen countries — Bulgaria, the Czech Republic, Estonia, Germany, Italy, Latvia, Lithuania, Luxembourg, Norway, Romania, Slovakia, Slovenia and the United States — will pay for the new system, but all 28 alliance nations are due to participate in its long-term support.

Northrop, the prime contractor for the program, will build the Global Hawk planes, supporting systems and payloads including the MP-RTIP radar, which can also provide radar imagery of target locations and stationary objects.

Companies in the 13 countries funding the program will be responsible for building the ground stations that will run the unmanned planes. They include Cassidian, Selex Galileo and Kongsberg, ComTrade d.o.o, and Bianor. The ground element provides real-time data, intelligence and target identification to commanders within and beyond line of sight.

NATO AGS will have its main operating base at Sigonella, Italy, co-located with the U.S. Air Force Global Hawks and the U.S. Navy’s Broad Area Maritime Surveillance, helping reduce logistics and maintenance costs.