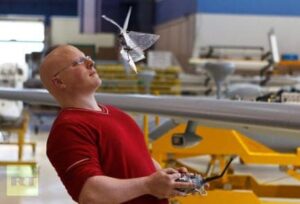 The future is here and this is not a butterfly on your wall, as Israeli drones are getting tiny. Their latest project – a butterfly-shaped drone weighing just 20 grams – the smallest in its range so far – can gather intelligence inside buildings.

The new miniscule surveillance device can take color pictures and is capable of a vertical take-off and hover flight, just like a helicopter, reports the daily Israel Hayom. Israel Aerospace Industries (IAI) says this may come in handy in ground clashes, when a soldier would merely take it out of a pocket and send behind the enemy’s line.

The insect-drone, with its 0.15-gram camera and memory card, is managed remotely with a special helmet. Putting on the helmet, you find yourself in the “butterfly’s cockpit” and virtually see what the butterfly sees – in real time.

“The butterfly’s advantage is its ability to fly in an enclosed environment. There is no other aerial vehicle that can do that today,” Dubi Binyamini, head of IAI’s mini-robotics department, told Israel Hayom.

Structures under observation can be anything from train stations or airport terminals – or office buildings – to battlefields and even forests in, say, southern Lebanon, where Israel believes Hezbollah hides its ambush squads.

The virtually noiseless “butterfly” flaps its four wings 14 times per second. Almost translucent, it looks like an overgrown moth, but is still smaller than some natural butterflies.

This is bio-mimicry, when technology imitates nature. And this has proved to hide a trap. When the device was tested at a height of 50-meters, birds and flies tended to fall behind the device arranging into a flock.

The IAI, Israel’s major aerospace and aviation manufacturer, needs two more years to polish their “butterfly” project. The product seems to fall into the trend of reducing drone size. Their recent models promoted for city observation and conflicts were the Ghost, weighing 4 kg, and Mosquito, which weighs only 500 grams.

While the “butterfly” may bring “a real technological revolution,” as the developer predicts, to the military field, questions remain how it will change the civil life. The drone is also propped up for police use and there is little doubt that secret services will be only too happy to grab such an intricate weapon.