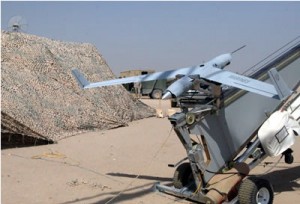 A police officer pulls up to a home to check on a report of a missing child. Within minutes, he’s taken a miniature plane from his patrol car’s trunk and sent it up to look over the area where the child was last seen.

Across town, a fire chief wants to know whether it’s safe to put his crews on the roof of a burning home. Using the same type of unmanned aircraft, the chief can see whether the fire has already reached the zone he wants to attack.

Scenarios like these may be possible in the next few years through the work of Bingen-based Insitu and others in the unmanned aerial vehicle industry.

“There will come a day when every fire truck and police car will have an unmanned aircraft as a component of its equipment,” predicted Don Shinnamon, a business development executive for Insitu.

“That literally is on the horizon,” he said.

Shinnamon, a retired police chief and fire department director who is a helicopter and fixed-wing pilot, and other company officials gave a presentation last week to about 15 representatives from fire departments, law enforcement agencies and search and rescue organizations as a precursor to a statewide Search and Rescue Conference in Goldendale this weekend.

Insitu sponsored the conference, an annual event that draws several hundred search and rescue officials and volunteers from the Pacific Northwest and beyond.

Insitu — Klickitat County’s largest employer with 800 employees — started in 1994 as a private business focused on finding uses for unmanned aerial observation in the maritime industry, such as fishing. Now a subsidiary of The Boeing Co., Insitu has become a leading provider of drone-based video reconnaissance for the U.S. military.

Widespread domestic deployment of drones has been delayed by concerns from the Federal Aviation Administration over how they would mix with regular aircraft. But Congress earlier this year directed the agency to develop and implement those standards by 2015.

Starting in April, Insitu has offered to respond free of charge for the next year to wildfires, floods and other incidents in Washington and Oregon where drone flights could be useful. Regulatory hurdles remain, but Shinnamon said Insitu is working with Gov. Chris Gregoire’s office to smooth the way for flight operations.

Last Thursday, Insitu gave search and rescue officials from both states a chance to see its ScanEagle in action at an Arlington, Ore., test facility.

The ScanEagle, which weighs about 44 pounds, is 10 feet wide and 5 feet long. About two dozen are in the air across the globe at any one time, the company says, and have been used extensively in the wars in Iraq and Afghanistan.

The remote-controlled drone sits in a launcher, with the propeller whirring as it waits for the push of a button that sends it into the air. On takeoff, it heads toward operating altitude, generally 1,000 feet and above.

In the control truck, operators watch three screens that monitor the drone, its flight path and its transmitted video. When the drone is done — it can stay aloft close to 24 hours — it returns to earth. One of the wings catches on a high-strength tether, spinning the drone around and stopping it so it can be lowered to the ground.