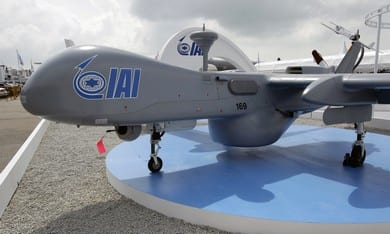 Officials fear prolonged grounding could scuttle sales to France of Heron TP, dubbed the drone “that can reach Iran.”

The Heron TP, Israel’s most advanced unmanned aerial vehicle, remains grounded almost four months after one crashed during a test flight near the Tel Nof air base outside Rehovot.

Two panels set up independently by the Israel Air Force and Israel Aerospace Industries, the drone’s manufacturer, are still investigating the cause of the crash and there is concern that the continued grounding will affect a possible sale of the Heron TP to France.

At the time of the crash, officials said it occurred after the UAV performed a maneuver that was beyond its capabilities, causing one of its wings to break off. The aircraft was flying with a new navigation component that, as the IAF suspected at the time, might have disrupted the drone’s automatic flight systems.

The Heron TP is the air force’s largest UAV. It has a 26- meter wingspan – the same as a Boeing 737 – and can stay airborne for over 24 hours. It can carry a 1,000 kg. payload, making it capable of conducting a wide variety of missions.
According to foreign reports, it can also fire missiles. In Israel it is often referred to as the UAV “that can reach Iran.”

Last July, in the first export deal for the Heron TP, Israel Aerospace Industries won a $500 million contract from France. The agreement has yet to be signed and IAI is in the midst of negotiating the final details with the French Defense Ministry. It hopes the sale will lead to additional contracts for IAI as other countries, such as Germany, upgrade their UAV capabilities.