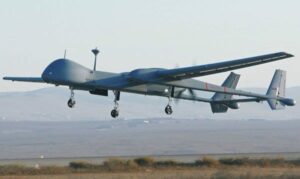 A disagreement between Israel Aerospace Industries and the Israeli air force over the cause of a Heron TP (“Eitan”) unmanned air vehicle crash on 29 January has resulted in the type remaining grounded.

A joint investigation into the incident will be completed soon, and a senior IAI source says “the Heron TP will be in the air again in weeks”.

Operations with the medium-altitude, long-endurance UAS have been halted since a Heron TP crashed shortly after taking off on a test flight from an air force base in central Israel.

The activity was being performed jointly by the service and airframe manufacturer IAI, with the aircraft later confirmed as having been carrying an undisclosed new payload.

Initial reports suggested the aircraft’s wing had broken in the air after it exceeded the boundaries of its flight envelope.

The Heron TP is the largest UAS to have entered use with the Israeli air force. Powered by a Pratt & Whitney Canada PT6 turboprop engine, it has a maximum take-off weight of more than 4,000kg (8,810lb), including a maximum payload weighing more than 1,000kg.