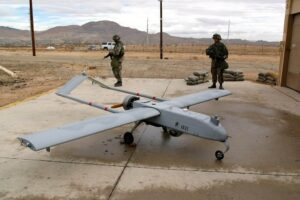 Brisbane has become the nerve centre for a new hi-tech drone spy plane just launched by the Australian Army in Afghanistan.

Four of the multimillion-dollar Shadow 200 unmanned aerial vehicles (UAVs) are being used by Diggers to detect Taliban forces and protect allied troops.

The $175 million Shadow 200 implementation program is being overseen by the 20th Surveillance and Target Acquisition Regiment, based at Brisbane’s Gallipoli Barracks.

Soldiers are being trained to use the spy planes on flight simulators at the barracks before being deployed to Afghanistan, where the state-of-the-art drones have only been in use for two months.

Amid tight security at an aircraft conference on the Gold Coast, regiment commander Lieutenant-Colonel Nathan Loynes showed off one of the drones publicly for the first time.

“It’s so new it’s just come out of the box – it hasn’t even got the Australian Skippy painted on to it yet,” he said.

Luitenant-Colonel Loynes said the Shadow 200 was no toy.

The US-designed drones can fly as high as 4500m at speeds of more than 200km/h, detect targets as far as 10km away and transmit “real-time” video images day and night back to ground troops.

It can also deploy lasers to pinpoint enemy forces.

Luitenant-Colonel Loynes said while drones had been used by armed forces for years, the Shadow 200 was the latest and greatest and would save lives in Afghanistan.